SF Beer Week Events at the 21A

“Brewer’s Sunday Tea”
Sunday, February 8, Noon-3pm
This event is a Strong Beer Month Festival at the 21st Amendment with Taylor Boetticher of Fatted Calf and beers from Magnolia Gastropub and the 21st Amendment with a few special surprises. Enjoy Fatted Calf's delicious handcrafted sausages grilled outside in the 21A's beer garden while enjoying great tasting strong beers. The $30 price includes 10 tasting tickets and a yummy sausage with all the fixings, yes fixings. You can purchase tickets in advance at the 21st Amendment for what will surely be a popular event. $30 ( price includes 10 tasting tickets and Fatted Calf sausage )

“A Beer Dinner with the Homebrew Chef”
Sunday, February 8, 6pm-9pm
Sean Z. Paxton, chef and brewer extraordinaire is paring and cooking with the beer Monk's Blood, that he guest brewed at the 21st Amendment for this year's Strong Beer Month. Monk's Blood is an extraordinary brew made with exotic sugars and ingredients and is based on the beer "Saucerful of Secrets" that he designed and brewed at Firestone Walker Brewery with Matt Brynildson. The price is $50 and includes the four course menu and beers. 21st Amendment Head Brewer Jesse Houck is also looking into the great 21A library beer cellar for tasty surprises to be served the night of this amazing dinner.

“Wanna git my Eastern Peanut Butter in yer Western Chocolate”
Monday, February 9, 6pm-9pm
Witness Sam Calagione from Dogfish Head and Shaun O'Sullivan of the 21st Amendment in an East vs. West Coast Slam pairing Dogfish Head beers with West Coast foods and 21A beers with East Coast food. Think Tupac vs. Biggie, Spicoli vs. Sam from Cheers, The Grateful Dead vs. Velvet Underground. It will be a legendary showdown, featuring some of the best craft beer around, no matter which coast you’re from. You won’t want to miss it, and the $50 price includes a fantastic 4 course dinner orchestrated by the 21-A's Chef Lorenzo Kersavan and of course all the entertainment you could possibly stand. Call 415-369-0900 for reservations they will go fast.

“Got Wood?”
Thursday, February 12, 6pm-9pm in the 21A's Brewer's Loft.
"Got Wood?" at the 21st Amendment is an evening featuring wood and barrel aged beers from Elysian Brewing Company in Seattle, Washington and the 21-A served in the Brewers Loft at the 21st Amendment. Enjoy Elysian's Brewing Jackfrost (Bifrost Winter Ale aged in a Jack Daniel's barrel), and OakFrost (Bifrost Winter Ale aged on medium toast French oak). The 21st Amendment will be serving barrel aged Lower De Boom Barley Wine, and an oak-aged cask of Hop Crisis Triple IPA. Join Elysian's Dave Buehler and Shaun O'Sullivan in the Brewers Loft for some extraordinary beers and very good time!
Posted by 21st Amendment Brewery at 12:54 PM 1 comment: Links to this post

Yes We Can! Inaugural Party and Celebration at the 21A 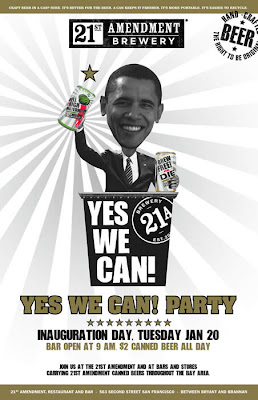 Join us all day Tuesday, January 20th starting at 9AM for an Inaugural day party and celebration at the 21st Amendment. $2 canned beer all day. See you here bright and early.
Posted by 21st Amendment Brewery at 10:40 AM No comments: Links to this post

The Homebrew Chef Cooks Up a Beer 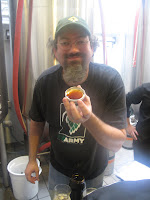 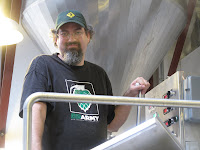 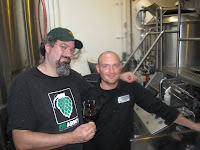 Sean Paxton, the Homebrew Chef came into the 21A last week and brewed with Head Brewer Jesse Houck, a Belgian dark strong beer as part of one of the six offerings we will have on for Strong Beer Month this February. Sean brewed a version of this beer with Matt Bryndilson of Firestone Walker and it was called Saucerful of Secrets. Made with seven different types of sugar, this beer brewed at the 21A will be high in alcohol (hence it's inclusion in Strong Beer Month) and will have a very complex malt profile.
Posted by 21st Amendment Brewery at 11:21 AM 1 comment: Links to this post 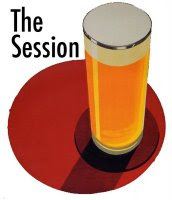 This month's Session is hosted by Beer and Firkins asking the question: "What will you miss about 2008 and what are you looking forward to in 2009?" Big questions with no small answers.
2008 was in my opinion not a great year. YES, there was great beer made and I certainly enjoyed my fair share, but as a producer it financially sucked the life out of you. 2008 was the year that Nico and I started up our beer packaging enterprise and it was a rough. We started this past May and everything was looking rosy. I had contracted the pre-requisite hops matching up our forecast for the year and subsequent years and at the very least had the supply, but paid dearly for them. With fuel surcharges on shipping, the rise in raw materials and the economy taking a big hit, 2008 was reminiscent of when we opened the doors at 21st Amendment.  Back in 2000 with the dotcom bomb fallout, 9/11 and the economic downturn it created some hard times for us. It was probably the worst time in the city of San Francisco to open a brewery/restaurant. But we weathered that storm and have become the wiser for it.
As far as 2009 is concerned, I personally have hung the possibilities that the new president might be able to inject at the very least some stability into our economic situation and maybe make it a little easier for the small business owner to flourish and succeed. With those two things comes opportunity. And as I turn this off-topic rant back toward beer, I think 2009 will be better for us beer producers and the beer drinkers as well.
Looking ahead to 2009 and Beer I am excited about something that we are seeing more and more of in the beer community, particularly the craft beer world, the Collaboration Beer. At the 21A we started what I affectionately refer to as the "Brewer Outreach Program." In 2008 we had Mitch Steele from Stone Brewing come to the 21A and brew the Transcontinental IPA,  a version of a beer that he brewed in England at the Shepard Neame Brewery in Kent as part of a collaboration between those two breweries. The Brewer Outreach Program was really conceived years ago with the great iconic brewer Scott Turnidge. Scott was brewing at Wynkoop and the now defunct Broadway Brewery in Denver, Colorado. He went on to start the brewing program at Beach Chalet Brewery in San Francisco and since he was new to the bay area, invited brewers in the City to come into the Beach Chalet and brew their beer on his system. It was a great way to ingratiate himself to the community and I personally have a great memory of the sun setting over the pacific when I brewed out there when I was brewing at Steelhead Brewery. Good times.
Flash forward to the Craft Brewer conference in San Diego this past year, late night beers with Mitch and Chuck from Green Flash Brewery and the idea was reborn.  In this day of brewery and distributor consolidation and the ever changing market place it's nice when brewers from different breweries can get together and produce some great beer. This year Gabe Fletcher from Midnight Sun Brewery is coming in and maybe Chuck Silva from Greenflash. The collaboration idea is not new for 2009 and we have seen it with the folks at Stone Brewing and their joint effort with Mikkeller Brewing and Alesmith Brewery on a Belgian Tripel. Then there was a group effort with the Belgo-American Rat Pack, Sam-Vinnie-Rob-Ken-Tomme, put out in 2007 the Isabelle Proximus. Melissa Myer's, a long time bay area brewer just came into the 21A and brewed her Scotch Ale. Plenty of inspiration to draw on.
Collaboration  = Inspiration.
Shaun
Posted by 21st Amendment Brewery at 7:30 AM 1 comment: Links to this post 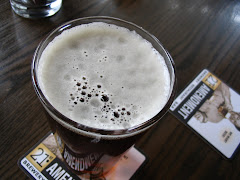